Crypt Monkey Blogs
Work - Work & Chris Hardwick!
March 16, 2015 10:38 pm CDT
When I first started thinking about what kind of stuff we should include in our site blog, I knew I wanted to throw in some of the personal junk we might go through during this effort and some of the fun too. And of course we want to keep you guys up to date with where we are on our releases, events, and upcoming announcements. Based on that, I think it's appropriate that the first blog I write, before we have even opened our doors to the site, manages to cover several of those bases!

Everyone give me just a minute and I'll get to Chris Hardwick but first I'd like talk about what we have been up to behind the scenes here.

Let's start with our release progression. We put our temporary corporate and game sites in place months ago. Since then, we've been pushing to get the game site ready for release while working out a deal for one of our first primer games. As I write this now, we haven't completed negotiations with the game creators so I can't say a lot on that quite yet. I can tell you that we're really excited about it and the game is a lot of fun to play. If all goes as planned, we should have an announcement for this game soon!

Can't say enough about this next game though! We have also been working on finishing up the prototype for the House of Possession primer / card game. House of Possession is a great, fast paced game that sends you and your opponents hurtling through a giant house trying to find the way out. All the while, you are pursued by demons that like to play with their food before they eat it. I know that's not a lot of information but you can read more about House of Possession (or HoP as it's called around here) as soon as we open the doors to the site.

On to the next thing. Hmm, what else? Ah yea, this kind of stuff! We have been working very hard to get our release content ready. At the time I am writing this (March 15, 2015), all of the website features that we wanted to have ready for the release of the Crypt Monkey Games site are done. It's been months of work and it feels great to get to this point. So now we have been working to get a couple of blogs, some news, and of course I still have to go over and finish writing the rest of the HoP content!

Many thanks to my friends and co-game developers (Tony, John, and Paul) for inviting me to go see Chris Hardwick a few days ago! After all the hard work that has been going on here for so long, it was really nice to get out and do something fun. Chris Hardwick (of AMC's The Talking Dead, Nerdist.com, and more) and his opening act, April Richardson (an Atlanta girl that is both beautiful and hilarious), put on a great show at the Pageant here in St. Louis as a stop on Chris's Funcomfortable Tour. Chris tells a story about how he and his girlfriend get these Kigurumi pajamas for themselves and their little Chihuahua that made me laugh so hard I had tears in my eyes. Seriously funny as hell. Best Friday the 13th ever. 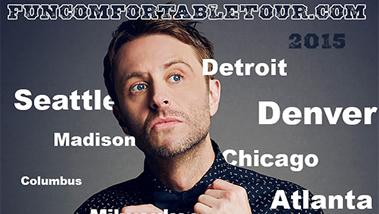 Everyone should go see this tour so that you too can belly laugh like an idiot! It's a great time and you get to go hang out with a bunch of other geeks. What more could you ask for? Boston, New York, Milwaukee and a few others cities aren't sold out yet. WTF? Go get a ticket, hurry! You can check out dates for your city at http://funcomfortabletour.tumblr.com/.

!OK! It's time for me to shut up now, other stuff to do. We really appreciate you visiting the Crypt Monkey Studios games site and hope you keep coming back. The whole reason we are starting our presences so early before releasing our games is so you can start getting to know us and we can get to know you when you post in your FAQ questions and Contact Us with your comments. We really are going to listen to you through the years so you really are gonna have to speak up! Happy gaming!