Crypt Monkey Blogs
HoP: Developer's Blog #5
July 27, 2015 11:37 pm CDT
Blog for  House of Possession
It's been way longer since the last developer blog than I had intended but we have been supper busy keeping all these projects moving forward. So I hope you'll accept my apology, Gamers!

Last time I wrote about HoP I mentioned that we had solved our play time issues. House of Possession is definitely a primer game. Well I am happy to add to that tidbit by telling you that we are very happy with times now. The difference is like night and day. Where before I knew that the game was taking too long by the fifth round, now I'm not even worried by the tenth round.

Most of our testing so far has been with three to five players, so we do need to hustle in a lot more six player testing to really see where the time is landing on those larger games. But I'm not worried about it anymore; our four player games average around five minutes and our five player games average around seven minutes. So we have a lot of head room left before we hit the fifteen minute ceiling.

One of the great things I've really been pleased with is that even a three player game feels just about right, it doesn't seem over too quick and you still have time to attempt a winning strategy. This is important to us because the whole point of the primer game type is to fill the void while you wait for the rest of your group to arrive. I can see a lot of three and four player sessions based on this premise, so I really want to get the timing comfortable within the two to fifteen minute window. And of course we want to achieve this without losing the strategic element of our game.

Finally, and I hope this makes up for the long time between posts, I have an image to share with you! This is a photo of some of our early prototype cards. The phrasing on these Possession Deck cards doesn't match the current version of the game and for all we know at this point, these cards may not make it into the production tuck box but I thought you might enjoy seeing how we scratch together our initial ideas. If you look real close, you can see the original card faces under our printed labels. It's a great way to prototype on the cheap and I highly recommend it! 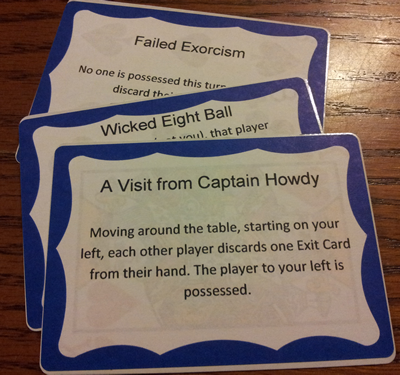 Until next time, happy gaming!