Crypt Monkey Blogs
What’s a Primer Game?
April 14, 2015 10:17 pm CDT
Has This Ever Happened To You?
Game night! Is there anything better? You show up, maybe even early, excited to get into the game with your friends and battle it out against hordes of goblins or werewolves. Tonight you will outwit dragons and stop a hostile takeover by a rival gang! Tonight your enemies fall to their knees before you while an entire town sings a song in your honor! At least, that's what you'll do once everyone arrives. There always seems to be one, and sometimes two, that can't get to gaming without being forty minutes late.

While you wait, you sit staring at your on time friends, silently cursing the tardy slacker(s). You start to hope that they demand last watch; you'll take first watch and finish them off in their sleep. That'll teach 'em for being late, for carving into your game time! Once you've finish planning the in-game torture and death of your late friend's character, you say, "Let's play some (fill in your favorite card or board game here)."

Now you've started this game and twenty minutes in, the late comers have finally arrived. The thing is you're a gamer, so you can't just put away the game you've started. You now have twenty minutes of your life invested, and you may even win. No, they were late so they can wait! But now they're pissed at you because they have nothing to do while the rest of you finish your game. They quietly begin to plot the demise of your entire party and can't wait to say the words "I'll take first watch!" 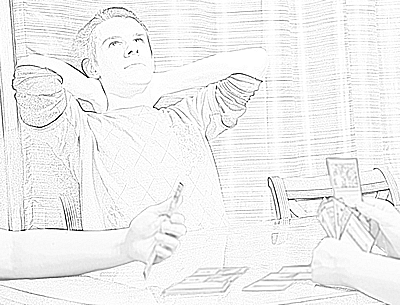 Back In The Day...
This sort of thing used to happen to me and my gaming groups all the time. We'd sit around talking for a bit, complain about our friends that were always late, and then pick up another game to kill the time while we waited. Of course the games we often picked were really long games. Games that should have been the "main event", the reason that everyone was getting together.

Usually, we would start to play a TCG that took a while to finish. I won't name the game here but it's the most popular TCG in the world. Then we might even throw in some house rules like ten round wall, which made the length of the game even worse in a four or five player free-for-all. We had games that lasted hours. Our friends who didn't arrive soon enough might sit there for that long waiting or start new games with players as they were knocked out of the original game. By the time we started roleplaying, we were several hours into the night.

Don't get me wrong, I am not knocking the ultra-popular TCG, it's a wonderful game. But it was frustrating to have to wait to play the game we were all there for. So this is the specific problem we set out to solve with Primer Games.


How The Primer Game Solves This.
I could say we simply call our games that have shorter playtimes Primer Games but that really wouldn't cover it. We are gamers, you can't just throw tic-tac-toe in front of us and think that it's going to solve a problem like this! So what must a short play time game have for real gamers to enjoy it?

The first element we allow for in our design is competitive strategy. No Go Fish guessing and matching, we want you to be able to make a plan and position yourself in the game. Just because the games are relatively short doesn't mean you can't inflict your own personal style and stratagem on your opponents. And we enjoy finding different ways of accomplishing this in the shorter format. In our Primer Games, we create frameworks for your strategy by including actions or components that may work in combination with other actions or components, by encouraging players through game play to "use their poker face" to outwit other players, by applying event based game play, and by many other methods.

Of course the most obvious component of the Primer Game is the short play time. Primer Games last between two and fifteen minutes long, so you can play multiple games before starting "the main event". When your buddy shows up just a few minutes after you've started a game, you'll likely finish just as the slacker has unpacked his/her dice bag. Which is great because it puts you that much closer to calling first watch!

So how do we keep Primer Games short and interesting? First, we utilize the KISS principle. By applying this principle, we find a good chunk of the work just... works itself out! And second, lots and lots of playtesting! We play the games with each other, with our families, with other friends, we get our friends to play with their friends and tell us how it goes, and then we test it some more.

In short, we create a simple game core then we:
Last Word On Primer Games...
We aren't the first group to create short games but we haven't simply created short games either. Primer Games are specifically designed to entertain people that define themselves as gamers who enjoy TCGs/CCGs, tabletop RPGs, LARPs, and board games. Primer Games also happen to take less time to play. And as with all Crypt Monkey games, Primer Games all have a story that lives outside of the tuck box!

We hope you'll all try our Primer Games with your friends and family and then let us know what you thought. In the meantime, if you have any questions, please ask over at our FAQ section.